THE slow traffic from the airport to our hotel gave me time to gently grasp the surroundings: modern buildings and billboards, palm trees towering above pretty bougainvillea bushes, smooth roads beside ancient Moorish ruins. Hola, says one billboard. That was when it finally hit me – I’m in Mallorca!

Our bus then passed by Castell de Bellver – the circular 13th century castle of King Jaume I. Intended for a summer residence but evolved into many things over the centuries – a refuge during the plague, a military fortress during the German rebellion, and a war prison tainted with stories of torture, pain, and death. Its survival carries inscrutable stories, stories of visitors who’ve heard of distant moans and cries from the castle’s chambers, stories that no one, until this day, can offer any suitable explanation. 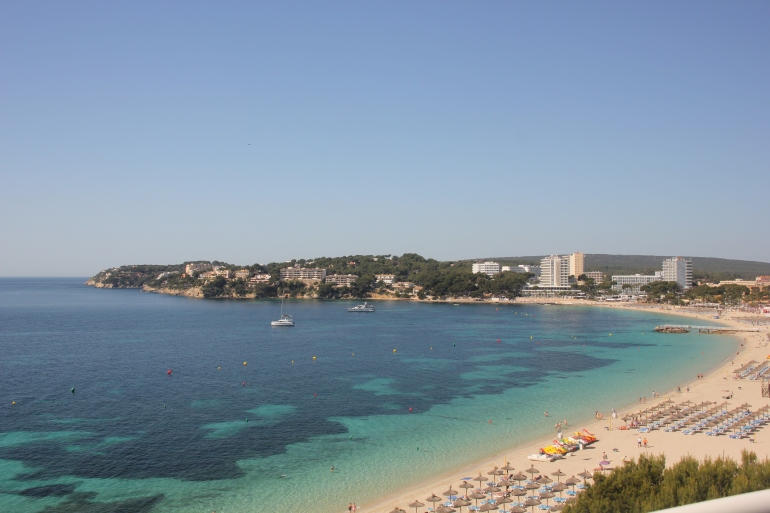 Mallorca is the largest island amongst the Spanish Balearic Islands which includes, amongst others: Minorca, Ibiza, and Formentera. A great trading route, Mallorca attracted a cornucopia of settlers, invaders, conquerors, traders and tourists. Thus, remains of churches, castles and coastal watchtowers dot the island.

It’s not a surprise to find young men walking aimlessly at 8 in the morning, too drunk to know where they are going

Mallorca’s 344-mile coastline – offering white sand beaches, clear turquoise waters, blue skies and glamorous sunsets — is its biggest selling point, where hordes of tourists flock during summer. Beaches are easily filled with excited tourists ready to do different kinds of activities under the sun. Excursions like dolphin watching and island hopping are also available and party boats make the rounds twice a day. Attracting mostly the younger crowd, party boats have ample food and drinks while live DJs play upbeat songs as they cruise to a smaller island for a swim stop.

Fronting the beaches are strings of bars, restaurants, shops and hotels. Partying, for some, can start as early as three in the afternoon until 6 a.m. the next day. It’s not a surprise to find young men walking aimlessly at 8 in the morning, too drunk to know where they are going.

It was like reading a beautiful line, or hearing soulful music – you just want to take it in.

Those who escape the hustle and bustle of the beachfronts have witnessed the impossibly charming small villages that can be explored either by hiking, cycling or driving. The backbone of the island, Serra de Tramuntana, is a scenic mountain range running southwest to northeast, housing idyllic towns connected through winding mountain routes. It’s a Unesco World Heritage Site for its cultural landscape, an award definitely well-deserved.

Following Tramuntana’s roads involves endless twists and turns, but it is definitely one of the most breathtaking road trips one can experience.

However, it was a visit to Fornalutx, named one of the most beautiful villages in Spain, that made me pause a while. It was like reading a beautiful line, or hearing soulful music – you just want to take it in. Fornalutx’s pretty houses and gardens, enchanting town square, and stunning cobbled streets are like an unpretentious piece of art painted in the middle of the glorious Serra Tramuntana. It’s a beauty difficult to ignore, thus, an al fresco lunch at the town square was in order.

There, under the shade of a century-old tree, was where a charmed traveler took a mouthful of frittatas, sobrasada, cheeses, olives, and a pitcher of sangria to water everything down. Dios mio, I’m in love…and full!

That influence continues today, for how can one visit this cathedral and not be moved?

Catholic faith is evident in Mallorca. There are towns named after saints while churches hold Sunday masses. Monasteries and convents are perched high above the mountains: Sanctuari de Cura, Santuari de Lluc and Convent de Sant Bernadi. Then, like a rhapsody, Catedral de Mallorca in Palma took my breath away. The extravagance of this gigantic cathedral with its gold ornaments and exquisite décor made me feel rather small, humbled. In the 13th century, when the Spanish took the island from the Moors, the cathedral represented Spanish power and influence and helped transform the island to total Catholicism. That influence continues today, for how can one visit this cathedral and not be moved? I looked at its grandiose altar and felt blessed to witness something this grand.

“Gracias, Senyor,” was all I said, and left the cathedral with a joyful heart.

Mallorca by the numbers

1,445 meters – highest peak, also the highest amongst the Balearic Islands