“Was I in a fairyland?” I mumbled. No need to pinch myself, I felt my feet begin to freeze. And there was my wake-up call, my trip back to reality, telling me that though the whole place looked surreal, the truth was that I was not in some fairyland…I was in Harbin, China’s Ice City.

The capital of Heilongjiang Province in northeast China, Harbin is one of the coldest and snowiest cities in the world and is considered the home of Chinese ice and snow art.

By wintertime, different kinds of ice sculptures can be found in Harbin’s Zhao Lin Park and Ice and Snow World, both of which exhibited amazing pieces of either ice and snow combined with lights and music that spelled nothing short of s-p-e-c-t-a-c-u-l-a-r! 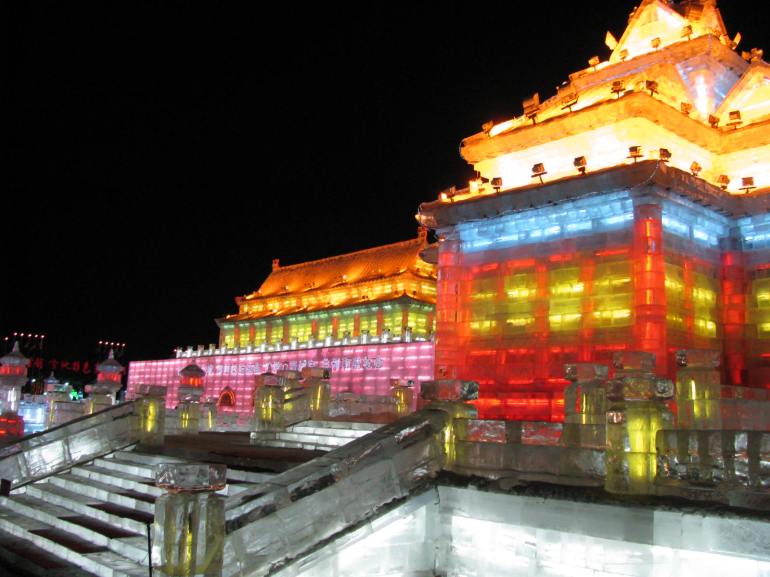 Since the 16th century, ice lanterns have evolved into ice sculptures carved from ice from the Songhua River, which is frozen at this time of the year. 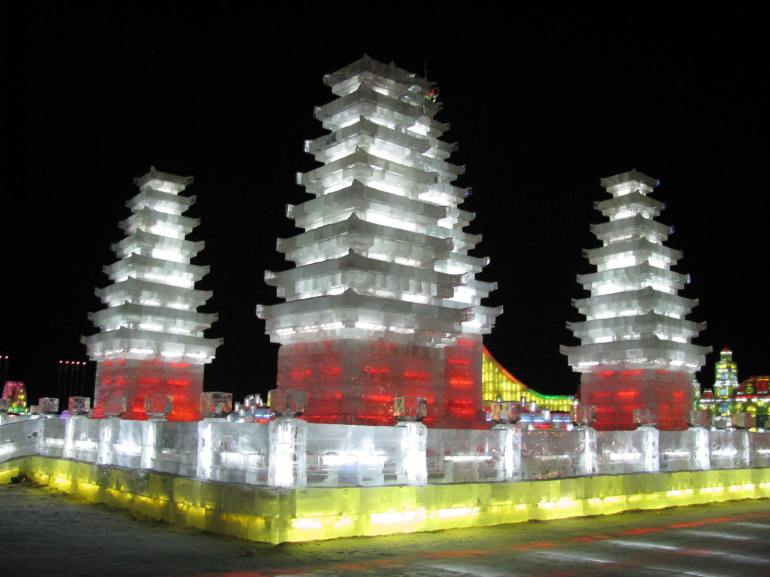 The event had its beginnings in simple ice lanterns dating back to the 16th century Qing dynasty. Local fishermen and peasants made ice lanterns in the winter by putting water in buckets and placing them outside to freeze. Before completely frozen, the ice was removed and a hole on top was made to empty out the remaining water. A lighted candle was then placed inside, making a wind-proof lantern.

Almost 2,000 ice sculptures dot the park. These are arranged by category from Chinese classic artworks to modern-day art. Since the 16th century, ice lanterns have evolved into ice sculptures carved from ice from the Songhua River, which is frozen at this time of the year.

Utterly impressed, I thought I had already seen the best ice sculptures in the world. But what I saw in Zhao Lin Park was just the tip of the iceberg, so to speak. There was more to come as the ice and snow sculptures at the Ice and Snow World totally blew me
away.

With almost all pavements made of ice, the walk is slippery and can be rather dangerous. 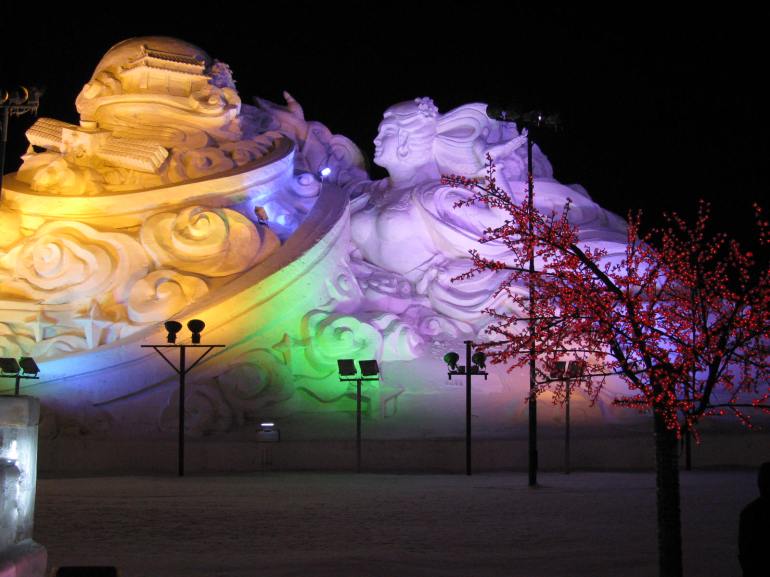 Located in the north band of the Songhua River, Ice and Snow World has an area of around 300,000 square meters, making it one of the world’s largest ice architecture parks. This year’s theme is “The Ice and Snow World, the dream of the Olympic games.”

Stunning ice structures of the Olympic Tower, Tiananmen Square, Parthenon, Catholic churches, to name a few, transported me to a dreamy winter escapade. 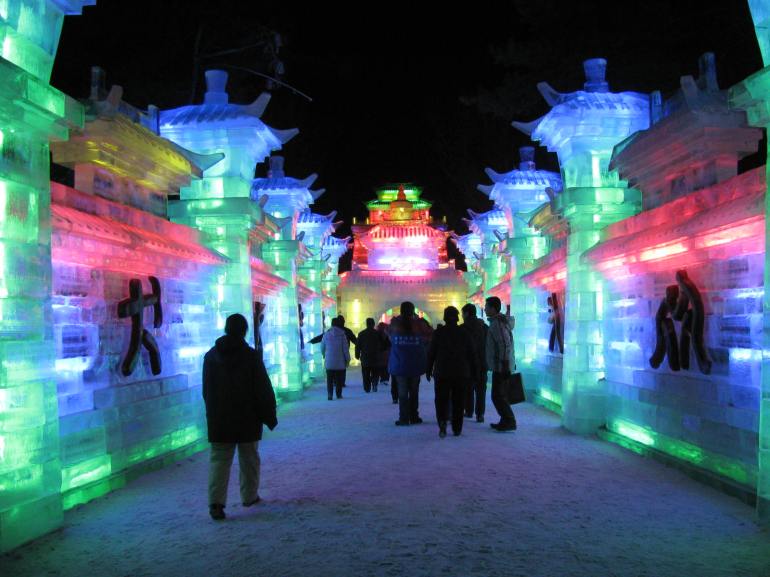 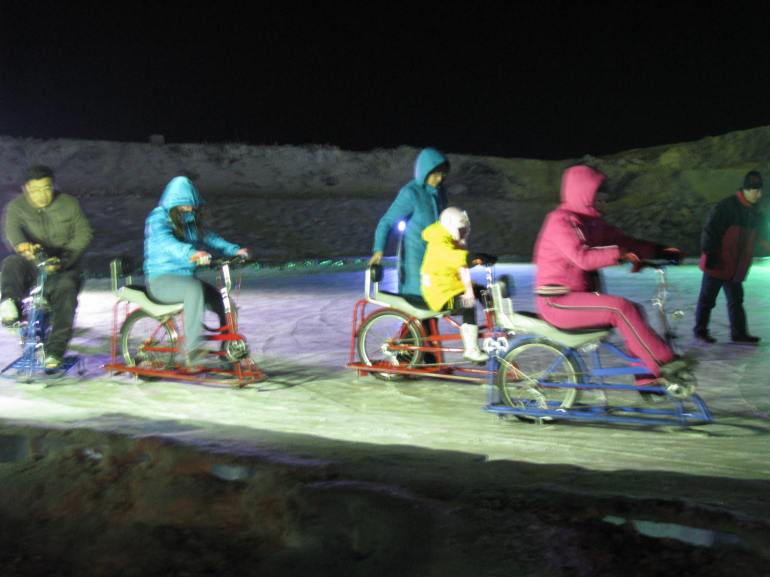 With freezing temperatures of almost -30 celsius inside, many digital cameras may not work under such conditions or batteries may run out quickly. A word of caution to take to heart– watch your every step, be extra careful. With almost all pavements made of ice, the walk is slippery and can be rather dangerous.

Walking down Central Street, it was hard to believe I was in China. 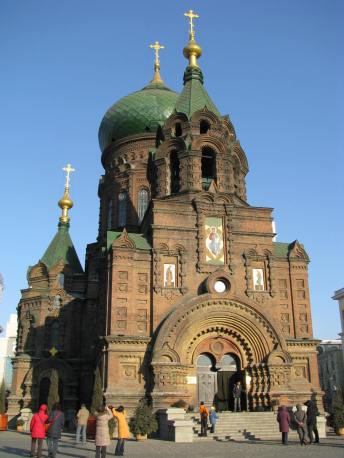 Besides being the “Ice City”, Harbin is also known as the “Oriental St. Petersburg”, “Oriental Paris” or “Oriental Moscow”.

Walking down Central Street, it was hard to believe I was in China. Shops were constructed in European architectural styles and you could find places with Byzantine and Baroque facades. Along this street were Russian wine shops and bakeries, Japanese restaurants, French fashion houses, American food outlets; and so much more, reflecting
a mixture of cultures from both east and west.

The first steel tower of Asia, the Dragon Tower, is 336 meters high and is the broadcasting television tower of Heilongjiang Province. One may do some recreational activities here or dine in the revolving restaurant where one can see the whole view of Harbin up 185 meters high. 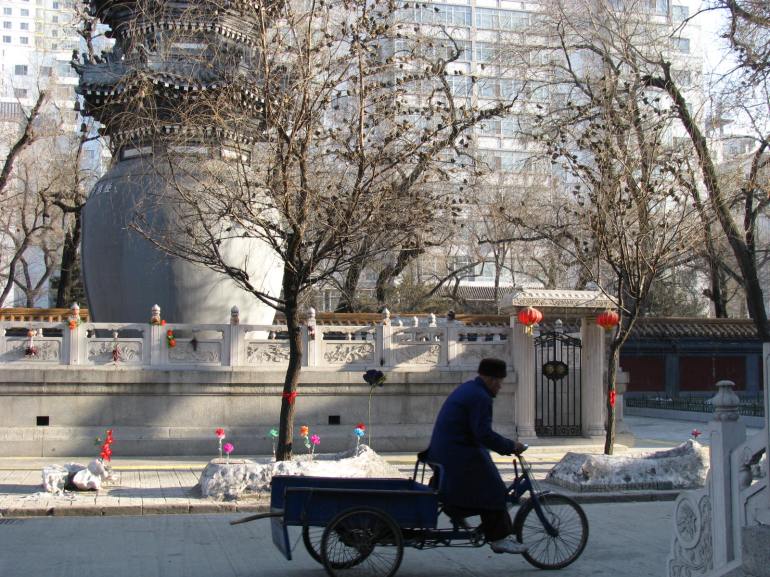 When you find it, you will think it just happened to be there, but in fact it was there only for you. It is not a coincidence.

I was mesmerized by St. Sophia Cathedral, the largest Russian Orthodox church in Harbin. Built in 1923 and finished in 1932, St. Sophia has Byzantine architectural features. In 1996, it became Harbin’s Architectural Art Gallery and houses
hundreds of pictures, almost all in black and white, of the old Harbin. 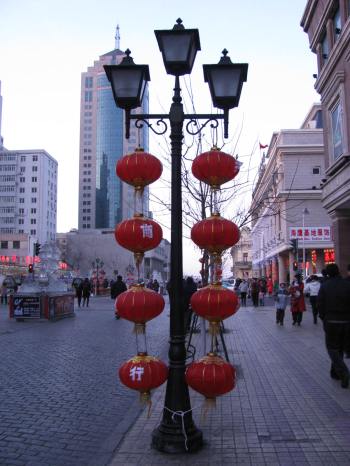 St. Sophia ceased religious services decades ago, soon after Mao Zedong came to power, yet its atmosphere of holiness proved that St. Sophia is still God’s holy place, and I’m sure it always will be.

Travel writer Mark Jerkins wrote, “On every journey there is something waiting for you. Something specific. When you find it, you will think it just happened to be there, but in fact it was there only for you. It is not a coincidence. If you have not found it, it would not have been there.”

And indeed, I found something specific in Harbin, something there that was only for me.